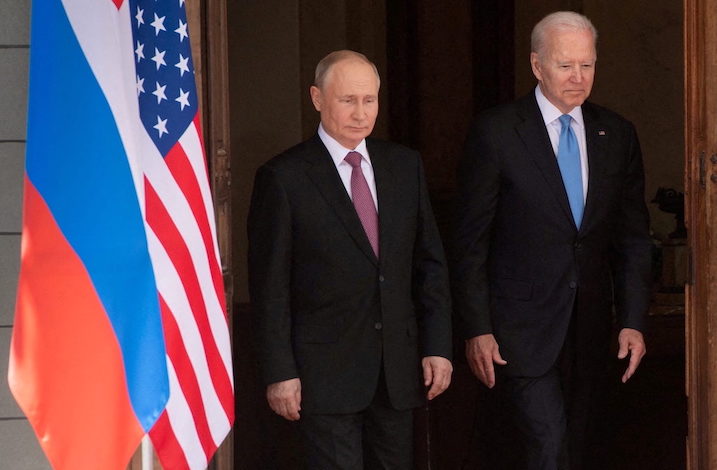 In Ukraine, Rival Worldviews Have Led to Unnecessary War

Whatever way one looks at it, Vladimir Putin’s decision to attack Ukraine has backfired. Geopolitically, the invasion unified and empowered Nato while increasing public support for the alliance across Europe. Militarily, the faltering attempt to seize Kyiv proved that regime change will require a permanent, large-scale Russian presence, which the Kremlin will struggle to sustain. Economically, the barrage of Western sanctions sent the ruble into free fall, creating a financial crisis that will be compounded by a costly war effort, and may elicit domestic resistance.

In the coming days, Putin will renew his efforts to storm Ukraine’s major cities, but commentators are already declaring his incursion a failure. Regardless of the outcome, this will not be Crimea 2.0: a swift annexation backed by semi-credible pretext and supported by the vast majority of Russians. Even if Putin succeeds in replacing Volodymyr Zelenskyy with a Moscow-friendly president, the situation could degenerate into something resembling Afghanistan in the 1980s: a bloody occupation to prop up an unpopular administration, under constant siege from rebels armed and funded by the West.

Given Russia’s disastrous situation, one might assume that US politicians were content to ratchet up tensions on the Ukrainian border until they spilled over into war. Indeed, Washington ignored countless opportunities to de-escalate the crisis and find a diplomatic solution. Last December, Joe Biden could have accepted Putin’s request to honour previous US assurances that Nato would not continue its eastward expansion – which had already advanced deep into the post-Soviet space. He could have halted the slow-moving plan to absorb Ukraine into its security bloc, implemented effective arms control measures, and pushed to ratify the Minsk II accords, establishing a comprehensive ceasefire in the country.

Instead, Biden met every Russian overture with maximal hostility, refusing to make even the most minor or gestural climb-downs on the question of Nato enlargement. The White House adopted this stance in the full awareness that it could spark a military conflagration. As Russia began its march across the border in late February, Jacobin’s Branko Marcetic drew the logical conclusion that this was exactly what the US foreign policy establishment had wanted.

But although Biden stands to gain from a revitalised compact with Western Europe, a Russian loss is not the same as a decisive US victory. For one thing, the American empire is best maintained through soft power, as opposed to its harder variants. The inability to keep Ukraine inside its orbit without resorting to proxy warfare is a sign that Washington’s usual approach has foundered. Moreover, the prospect of plunging the international monetary system into ‘financial war’, combined with the growing threat of nuclear escalation, is likely to alarm even the most hawkish US policymakers. Add to that the possibility of a Russia-China alliance – which, as Wolfgang Streeck writes, could trigger “a new cold or, perhaps, hot war between the two global power blocs, the one declining, hoping to reverse the tide, the other hoping to rise” – and the idea of an out-and-out American triumph seems uncertain. The invasion has not simply reasserted a stable, unipolar order in which Russia is isolated and the US reigns supreme. It has delivered a shock to the world-system – the effects of which may yet rebound upon its hegemon.

As such, it is hard to make the case that either player, Russia or the US, has acted entirely out of rational self-interest. Attempts to reduce either of their positions to realpolitik tend to come up short. To understand why the former launched its reckless operation, and why the latter provoked it, we must instead analyse their wider geopolitical visions – plus the dynamics of their collision.

In his recent essay collection Dissidents Among Dissidents, Moscow-based historian Ilya Budraitskis emphasises Putin’s longstanding belief in ‘civilisational identity’. After the collapse of the USSR, a powerful strain of thought – most notably represented by the political scientist Samuel Huntington – replaced the defining geopolitical question, ‘Which side are you on?’, with an alternative: ‘What are you?’ For Putin, Russian civilisation is defined by a set of ingrained customs, practices and traditions – many of them linked to the Orthodox Church – which are alien to Western culture. During his two decades in office, he has sought to build a ‘sovereign democracy’ that derives its legitimacy not from free and fair elections, as in the West, but from protecting these popular traditions against the levelling effects of globalisation. His world outlook is based on defending this quasi-ethnic particularism from the onslaught of American universalism (while paradoxically embedding the Russian economy in international capital markets). As Budraitskis writes: “The repressive political regime, clerical rhetoric, obscurantism in cultural life and military pressure on neighbouring countries: all these were only stages along the path taken by a civilisation as it returned to its true nature.”

Since this identity is not confined to Russia’s current borders, but rather extends to the Russia-aligned populations of the former Imperial state, Putin sees the eastern parts of Ukraine as equally in need of protection. This doesn’t mean he was always determined to unify the two nations at gunpoint: right up until the invasion, Moscow officials were briefing that Putin would have accepted a federal arrangement in Ukraine, giving greater self-determination to its Russophone regions, accompanied by a neutrality treaty. But it does mean there’s a hard limit on how much ‘Westernisation’ he will accept in his neighbouring state. Even if Ukraine was not imminently about to join Nato, its gradual movement away from the regional superpower towards the global one would have redrawn Eastern Europe’s civilisational map – an outcome Putin was determined to prevent. In this sense, there were two ways to interpret his claim on the eve of the invasion that Zelenskyy’s government was committing ‘genocide’ against the people of Donetsk and Luhansk. This was partly an outright lie, broadcast as part of the Kremlin’s so-called ‘information war’. But it was also an honest reflection of Putin’s delusional worldview, in which ‘the Russian people’ – as a distinct cultural entity – are existentially threatened by Western influence.

So while the Ukrainian adventure was clearly an act of criminal aggression, its basic rationale was defensive: to prevent the proliferation of what Russia perceives as hostile political-cultural forces on its doorstep. The same cannot be said of the US campaign for global hegemony. As Tariq Ali wrote last month: “Nato expansion – subordinating the advanced-capitalist European heartlands to US military command – is a voluntarist imperial strategy, not a question of national defence. Ideologically and strategically, Washington’s liberal-international militarism – dividing the world into “good” and “bad” states and pledging to regime-change the latter – is a recipe for war”. In this imperial imaginary, the US reserves the right to sanction, destabilise or overthrow any nonconforming government. Whereas Russia is concerned with carving out a local ‘sphere of influence’, the US empire recognises no territorial boundaries – national, ethnic or civilisational. Its nominal aim is to enforce a universal set of values: liberal democracy, human rights, the rule of law, free markets (though each of these can be downgraded in the name of ‘stability’ should they endanger the profit margins of American multinationals). In Ukraine, the Obama administration famously exercised this borderless sovereignty after the Maidan revolution by hand-picking members of the provisional government and brokering a savage neoliberal restructuring programme.

The tragedy of the Ukrainian conflict is that these rival dogmas – Russian sovereigntism and American imperialism – are equally detached from reality. As Anatol Lieven has shown, Ukraine was not going to join Nato anytime soon. No plans had been made for its membership, and no other state was willing to deploy troops to defend it. Thus, from Putin’s perspective, the idea it could constitute a military threat in the short- to medium-term was ludicrous; yet this was the upshot of a paranoid mindset that equated ‘Western influence’ with ‘genocide’. Likewise for Biden, the impossibility of admitting Ukraine to Nato within any realistic timeframe meant he had virtually nothing to lose by accepting Putin’s request for a block on further expansion. Yet to do so would have undermined his own geopolitical orthodoxy, in which US power must have maximal reach and minimal restraint.

The standoff that preceded the invasion was therefore over a point of principle – how much can the universal impinge upon the particular? – rather than a genuine security crisis. A symbolic concession from either side would have prevented the catastrophe that’s currently unfolding. Of course, the irony is that despite the obstinacy with which the Russians and Americans both clung to their respective foreign policy frameworks, the war exposes how each contains elements of the other. Russia has presented its actions as a form of humanitarian intervention, replicating the same arguments used by the US to justify its attacks on Iraq, Afghanistan, Libya and Yugoslavia. Meanwhile, the US has embraced a Manichean ‘Clash of Civilisations’ discourse in which Russia is an intrinsically backward nation whose people deserve collective punishment. At the core of American universalism, writes Perry Anderson, is American exceptionalism: the belief that the US has a unique civilisational entitlement to impose its values abroad. Seen in this light, there is perhaps more that unites the worldviews of Biden and Putin than either is willing to admit.

Oliver Eagleton is an editor at New Left Review. His first book, The Starmer Project, will be published by Verso in May 2022.