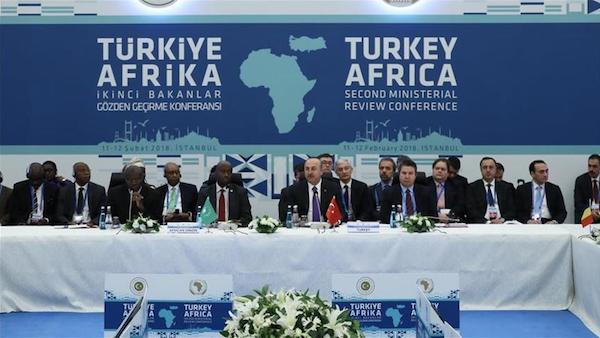 Turkey is set to welcome over 30 ministers and more than 1,000 businesspeople from 49 African countries at the 2nd Turkey-Africa Economy and Business Forum in Istanbul.

During the event, which will be held on Oct. 10-11, about 3,000 bilateral business meetings are expected, as well as the signing of new cooperation agreements.

Organized by the Foreign Economic Relations Board (DEİK) and Turkey-Africa business councils under the auspices of President Recep Tayyip Erdoğan in cooperation with the Trade Ministry and the African Union (AU) within the scope of the commercial and economic relations with Africa, the second installment of the forum will be held at Lütfi Kırdar Convention and Exhibition Center in Istanbul.

"We expect about 3,000 bilateral business meetings over two days. We think that along with these talks, this giant meeting will be the scene of new partnerships," he added.

"In this process, where Turkey completed its 15th anniversary of the African expansion, which has been implemented within the framework of the win-win policy since 2003, our trade volume with Africa quadrupled to $20.6 billion between 2003 and 2018. During the same period, our imports increased by two and a half times," DEİK Chair Nail Olpak said at a press conference launching the event. Olpak stated that direct Turkish investments in Africa approached $6.5 billion in 2017, while 78,000 jobs have been provided so far across the continent.

Pointing out that the African market has a very high potential, he stressed that the volume of projects undertaken by Turkish contracting companies in Africa exceeded $64 billion. "DEİK has 43 business councils in Africa. We aim to establish a business council in all the 54 countries in the medium term by accelerating our commercial diplomatic activities," he said. The forum is expected to host some 1,000 businesspeople operating in the printing, broadcasting, media, information technologies, consulting, education, durable consumption, furniture, forestry products, energy, food, agriculture, livestock, services, construction, environment, building materials, logistics, machinery, metal, mining, automotive, sub-industry, health, textile and leather sectors from 49 countries in the new market Africa. The aim of the forum is to showcase elements that encourage Turkish investments in Africa and the current successful examples. The keynote speeches of the forum, which will bring together the political leaders and senior decision makers with prominent portfolio managers and businesspeople in Africa, will be delivered by President Erdoğan, Ethiopia's President Mulatu Teshome, Turkey's Trade Minister Ruhsar Pekcan, DEİK President Olpak, African Union Commission Chairperson Faki Mahamat, Commissioner for Economic Affairs of the African Union Commission Victor Harrison and Pan-African Chambers of Commerce and Industry President Melaku Ezezew. Among the leading Turkish firms that have investments on the continent, there is Tosyalı Holding with investments in Algeria, Ayka Tekstil in Ethiopia, Yapı Merkezi in Sudan and Ethiopia, Summa Holding in Senegal and Sudan, Limak Holding in Cameron, Karadeniz Holding, Arçelik in South Africa, Tekfen İnşaat in Morocco, Taypa Tekstil in Egypt, Hayat Kimya in Nigeria and Çalık Holding in Sudan