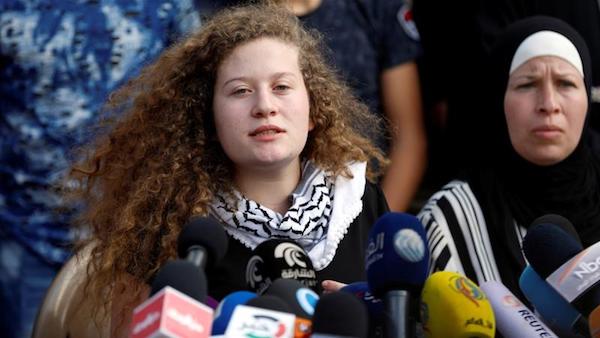 Ahed Tamimi and the power of Palestinian women

Ahed Tamimi, the 17-year-old Palestinian activist from the village of Nabi Saleh in the West Bank, is an icon of a rebellious young generation of Palestinians which has demonstrated it has little tolerance for Israel's persistent violations of their rights and freedoms. After spending eight months in jail for confronting Israeli occupation soldiers in her backyard, Ahed emerged even stronger and more determined to convey the pains and struggles of her people to the world.

"The power is with the people, and the people will and can decide their destiny and decide the future," she said, addressing a crowd of supporters and journalists after her release.

Ahed's story garnered a disproportionate amount of attention from international media outlets which have otherwise often ignored the courage and suffering of numerous Palestinian girls and women living under Israeli military occupation and siege for many years.

Recognising this fact, Ahed's mother, Nariman said: "Frankly it is probably Ahed's looks that prompted this worldwide solidarity, and that's racist, by the way, because many Palestinian children are in Ahed's position but weren't treated in this way."

There is much truth to this assertion. When Palestinian women are not invisible in Western media coverage, they are seen as hapless victims of circumstances beyond their control - the military occupation of their land and the "backwardness" of their own patriarchal society. They are hardly seen as agents of change; at best, they are presented as trapped in a "conflict" in which they play no part.

In truth, Palestinian women are hardly bystanders in the collective victimisation and resistance of the Palestinians, and regardless of their political orientation, religion or residence, they deserve to be made visible and understood within the larger context of the Israeli occupation of Palestine.

What follows are the brief stories of four powerful women from Gaza who, despite their struggle and courage, remain invisible to the media. They are raising families, teaching music, protesting at the Gaza-Israel fence, suffering their own losses and injuries, and persevering in the face of a harsh life under the blockade.

When Lamia's husband, Ghazi Abu Mustafa, was killed by an Israeli sniper on July 27 at the fence separating Gaza from Israel, she was serving in the field as a volunteer paramedic.

Lamia is the oldest of nine sisters and brothers. Her family, now residing in the city of Khan Younis in the southern Gaza Strip, is originally from the town of B'ir Al-Saba'a in historical Palestine and, like millions of Palestinians in Gaza and elsewhere, is now permanently exiled.

Lamia's belief in her right of return to her family home in Palestine was what motivated her to join the Great March of Return on March 30, which also marked "Land Day".

Her decision was strongly supported by her husband Ghazi, 43, who also joined the march on its very first day. Lamia offered to volunteer as a paramedic, aiding hundreds of wounded Palestinians every Friday. She knew too well how critical her role could be for those brave fighters and for their families. In the past, her husband was wounded several times while confronting Israeli soldiers.

His first injury, which blinded his left eye, was sustained during the largely non-violent mobilisation against the Israeli occupation (1987-1993) known as the First Intifada. In the March of Return, he was repeatedly shot, and with Lamia by his side, he returned to the fence, limping, to stand in solidarity with his people.

Lamia and Ghazi faced their challenges together, raised a family in impoverished Gaza and protested side by side as the Gaza march galvanised the whole community, men and women alike, like never before.

In July, Ghazi was fatally shot. He died while Lamia was saving the life of another badly wounded protester, Nahid Qadeh.

Lamia was devastated but not broken. A life of hardship and pain taught her strength and resilience. "A boat that is dedicated to helping others will never sink," Ghazi told her one day as they joined a large crowd of protesters at the fence.

The widowed mother of six has every intention to resume her work at the fence.

"Nothing will shake my belief in my right of return," she says, a lesson she constantly teaches her children.

Although the future of Gaza remains bleak, Lamia's resolve to achieve justice - for her family, her people and herself - remains unbreakable.

Reem found her calling during the Israeli war on Gaza in the summer of 2014. She would carry her oud every day from her home to the Sa'id Al-Mashal Cultural Centre, where she would spend hours playing music to frightened children and their families, who were taking shelter from Israel's incessant bombing.

For years, Reem tried to leave Gaza in search of a place where she could pursue her love for music at a respected art institute. Yet, her request to leave was repeatedly denied by Israel. There are thousands of students like Reem who have not been able to pursue educational opportunities outside Gaza for the same reason.

Reem has played the oud since she was a little girl. It was her companion, especially during the long nights of the Israeli bombing campaigns. Whenever bombs began to drop, Reem would pick up her instrument and delve into a magical world where notes and rhythms would defeat the unmitigated chaos outside her window.

When Israel launched its 2014 assault on Gaza, Reem invited others into her musical world. She played to the traumatised children at the cultural centre, who sang along as Israeli bombs dropped on their homes. When the war ended, Reem continued her work, helping children who were injured and disabled during the war at the same centre and elsewhere. Along with other young artists, she composed musical plays for them and set up performances to help these children overcome trauma and promote their inclusion in society.

In late 2017, Reem finally managed to leave Gaza to pursue her higher education in Europe. On August 9, 2018, she heard with a heavy heart that Israel had bombed the Sa'id Al-Mashal Cultural Centre and it had been completely destroyed.

Reem plans to return to Gaza when she is finished with her education. She intends to pursue a Master's degree in music therapy so that she can contribute to the healing of a generation of children scarred by war and siege.

"They want to stop us singing," she says. "But the opposite will happen. Palestine will always be a place of art, history and 'sumud' - steadfastness. I swear, we will have our concerts in the street if we must."

Shaima can hardly speak. Her brain tumour has affected her mobility and her ability to express herself. Yet, she is determined to pursue her degree in Basic Education at Al-Quds Open University in Rafah, in the southern Gaza Strip.

The pain that this 19-year-old is enduring is extraordinary even by the standards of poor, isolated Gaza. She is the oldest of five children in a family that fell into poverty following the Israeli siege. Her father is retired and the family has been struggling, but nevertheless, Shaima has been determined to get an education.

She was engaged to be married after her graduation from university. Hope still has a way of making it into the hearts of the Palestinians of Gaza and Shaima was hoping for a brighter future for herself and her family.

But March 12 changed all of that.

On that day, Shaima was diagnosed with an aggressive brain cancer. Just before her first surgery at Al-Makassed Hospital in Jerusalem on April 4, her fiance broke off the engagement.

The surgery left Shaima with partial paralysis. She speaks and moves with great difficulty. But there was more bad news; further tests in a Gaza hospital showed that the tumour was not fully removed and it must be quickly extracted before it spreads any further.

To make matters worse, on August 12, the Ministry of Health in Gaza announced that it would no longer be able to treat cancer patients in the Israel-besieged enclave.

Shaima is now fighting for her life as she awaits Israeli permission to cross the Beit Hanoun checkpoint (called the Erez crossing by Israel) to the West Bank, through Israel, for an urgent surgery.

Many Gazans have perished that way, waiting for pieces of paper, a permission, that never materialised. Shaima, however, remains hopeful, while her whole family constantly prays that their eldest daughter prevails in her fight against cancer and resumes her pursuit of a university degree.

Dwlat looks after a family of 11, including her nephews and her gravely ill father. She had to become the main breadwinner of her family when her father, 55, suffered kidney failure and was unable to work.

She would look after the entire family with the money she earned as a hairdresser. Her brothers and sisters are all unemployed. She used to help them, too, whenever she could.

Dwlat is a fighter; she has always been that way. Perhaps it was her experience on November 3, 2006, that strengthened her resolve. An Israeli soldier shot her while she was protesting with a group of women against the Israeli attack and destruction of the historic Umm Al-Nasr mosque in Beit Hanoun. Two women were killed that day. Dwlat was hit by a bullet in her pelvis, but she survived.

After months of treatment, she recovered and resumed her daily struggle. She also never missed a chance to raise her voice in solidarity with her people at protests.

On May 14, 2018, when the United States officially transferred its embassy from Tel Aviv to Jerusalem, 60 Palestinian protesters were killed and nearly 3,000 were wounded at the Gaza-Israel fence. Dwlat was shot in her right thigh, the bullet penetrating the bone and cutting through the artery.

Her health has deteriorated quickly since then and she is now unable to work. But Israel still hasn't approved her application to be transferred to Al-Makassed Hospital in Jerusalem to receive treatment.

Yet, Dwlat insists she will continue to be an active and empowered member of the Gaza community - for the sake of her family and her people, even if it means joining the protests along the Gaza fence on crutches.

In truth, Ahed, Lamia, Reem, Shaima and Dwlat embody the remarkable spirit and courage of every Palestinian woman living under Israeli occupation and siege in the West Bank and Gaza. They endure and persist, despite the massive price they pay and continue the struggle of the generations of courageous Palestinian women who came before them.